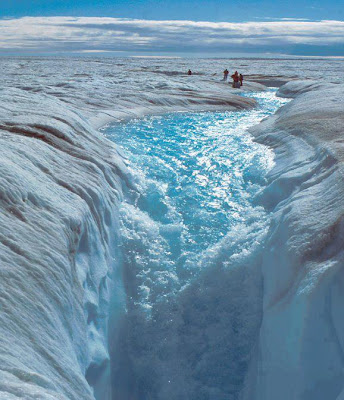 The Greenland ice sheet covers roughly 85% of the land surface of the island and rises to an average height of 2.3 km (1.6 miles). The Greenland Ice Sheet is also sometimes referred to under the term inland ice, or its Danish equivalent, indlandsis. It is also sometimes referred to as an ice cap The immense weight of the ice sheet has pushed the center of the island roughly 300 meters (1000 ft) below sea level. The icy expanse of Greenland, like the rest of the Arctic, not only represents an important climatological indicator, it also is critical to future global climate. Were all of Greenland's ice to melt, global sea level would rise 7 meters (23 feet). Greenland's ice sheet is slowly melting due to warming temperatures, and there is great concern that this melting will accelerate and contribute to sea level rise of several feet later this century.

Recently, An iceberg twice the size of Manhattan (100 square mi) broke away from the Petermann glacier in northern Greenland in July 2012
[source]
22:49
Greenland, Nature facts