Dede Koswara is a 35 year old fisherman in Indonesia. As a teenager, he cut his knee and ever since then strange growths have covered his body. The growths on his hands and feet look especially like a tree roots, and the large patches on his skin resemble the bark of a tree. As such, he’s simply called Tree Man. 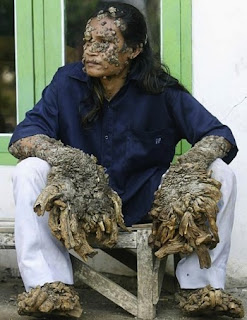 The story of Dede’s condition begins 30 years ago when he was 10 years old. Whilst out in the forest near his home on the island of Java in Indonesia, Dede cut his knee whilst out in the forest. Shortly afterwards, small warts sprouted around the wound, which eventually spread to his feet and hands.
As he grew older, his warts continued to grow. Eventually the sheer number and size of them meant that his ability to carry out his job as a tradesman suffered and though the warts didn’t hurt or itch, they gave off a sickening odour. At the age of 28, Dede’s wife of 10 years left him as he became unable to work to support her and their two children.

Dede ended up travelling with a circus to earn a living. It was whilst he was there that a photo of him posted online attracted the attention of a group of documentary makers who sought the advice of dermatologist Anthony Gaspari, about what was the cause of his condition. 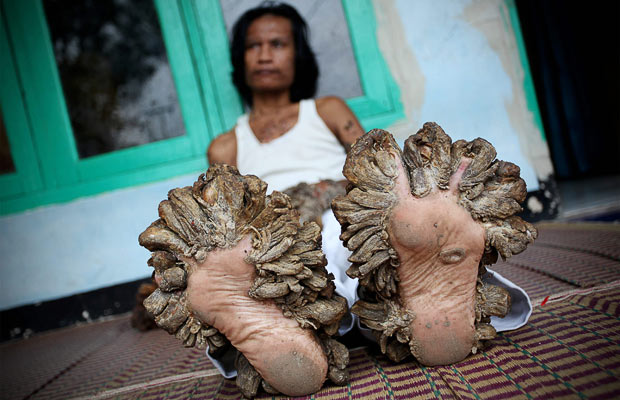 Disease : Dede is thought to suffer from a tongue-twister of a disease known as Epidermodysplasia verruciformis. It means that he has an abnormal susceptibility to human pappilomaviruses. Human pappilomaviruses (HPVs) are extremely easy to contract, and it has been suggested that up to 80% of people may be infected, though they show no symptoms. There are around 200 known types of HPV, but the majority have no noticeable affect. In rare instances, it can lead to certain forms of cancer but the most common result of an HPV infection is your simple, everyday wart.

According to the leader of the team which treated Dede at the Hasan Sadikin Hospital in Bandung, “he is like an HIV patient, but he is negative. Because his immunity system is so weak, it’s easy for other infections to enter his body.”