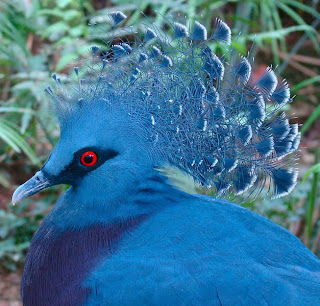 The Victoria Crowned Pigeon, Goura victoria, is a large, bluish-grey pigeon with elegant blue lace-like crests, maroon breast and red iris. The bird may be recognized easily by the unique white tips on its crests and by its deep 'whooping' sounds made while calling. Both sexes are similar. It is on average 74 cm (29 in) long and weighs 2.38 kilograms (5.3 lbs). It is marginally larger than the other crowned pigeons on average and likely the largest species of pigeon of earth. The name commemorates the British monarch, Queen Victoria of the United Kingdom.

One of three superficially similar species of crowned pigeons (the others being the Western Crowned Pigeon and the Southern Crowned Pigeon), the Victoria Crowned Pigeon is distributed in the lowland and swamp forests of northern New Guinea and surrounding islands. Its diet consists mainly of fruits, figs, seeds and invertebrates. The female usually lays a single white egg.

There are two subspecies of the Victoria Crowned Pigeon, Goura victoria victoria, the nominate race is the smaller of the two supspecies and can be found in Yapen, Biak & Supiori. Goura victoria beccarii is found on the mainland of New Guinea.
22:40
Amazing Creatures, Amazing Pegion, Animal Facts, Incredible Creatures