Home » Health Facts » Sleeping Facts » What Does Sleeping Position Says About Your Personality?

What Does Sleeping Position Says About Your Personality? 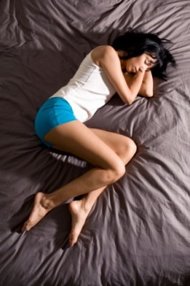 The way you sleep can give startling insights into your personality, even giving away how stubborn, bossy or stressed you are, a body language expert has claimed.

Years and years ago, the corpse-looking college student still in her clothes would have mumbled something like, "Finals. Boys. Beer."

Our lives, the amount of sleep we get, and how well we actually rest during those night time hours may change drastically over time. However, one sleep researcher says that the positions of our body in bed could say something about who we are, not just what else is happening in our lives.

Professor Chris Idzikowski, director of the Sleep Assessment and Advisory Service, says that a study of 1,000 Brits revealed that the six most common sleeping positions are indicative of personality types.

Fetal Position (41%) - Curled up on your side, holding the pillow. The most popular sleeping position, this one was favored by 51% of the women in the study. The personality of these sleepers tends to be shy and sensitive, though they may present a tough exterior to the world.

Log position (15%) - If you sleep on your side with both arms down, you are a social, easy-going person who is trusting, sometimes to the point of being gullible. The study showed 15% of people sleep like a log.

Soldier Position (8%) Flat on your back with arms at your sides. Indicates a quiet and reserved personality who sets high standards.

Yearner position (13%) - A close third is the side-lying position with both arms out in front of the body, with 13% of partipants sleeping like this. Yearners are noted to be open-minded and still cynical, suspicious, and stubborn about sticking to decisions once they are made.

Starfish Position (5%) - Lying on your back with arms and legs outstretched. Indicates a good listener who makes friends easily, but prefers not to be the center of attention.

Freefall Position (7%) - Flat on your stomach with arms at the head or ears. Indicates a brash and gregarious exterior who may inwardly be nervous and sensitive to criticism.

If you think you are one of those people who move through all of these positions, that's not likely to really be the case. Idzikowski said the research reveals most people stay in the same position all night and only 5% lay differently night by night. Also interesting is that the study showed only one in ten people cover their bodies entirely with a blanket, with most people exposing an arm, leg, or both feet.


He concluded that the freefall position was good for digestion, while the starfish and soldier positions were more likely to lead to snoring and a bad night's sleep.

Professor Idzikowski said: "Lying down flat means that stomach contents can more readily be worked back up into the mouth, while those who lie on their back may end up snoring and breathing less well during the night.

"Both these postures may not necessarily awaken the sleeper but could cause a less refreshing night's sleep."

The research also found that most people are unlikely to change their sleeping position. Just 5% said they sleep in a different position every night.

Professor Idzikowski also found that one arm or leg sticking out of the duvet is Britain's most common position, followed by both feet poking out the end.

One in ten people like to cover themselves entirely with the duvet.