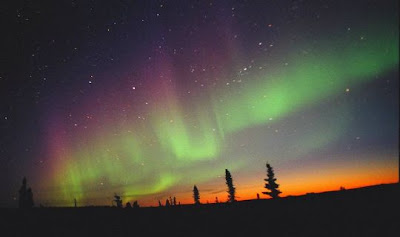 Aurora are naturally colored light displays in the sky that are usually observed in the polar zone at night. They occur in the ionosphere in this way some scientists call them “polar auroras”. The charged particles originate in the magnetosphere and solar wind on Earth, are directed by the Earth's magnetic field into the atmosphere. Aurora is classified as diffuse or discrete aurora. The effect is known as the aurora borealis in northern latitudes, “Aurora” is for Roman goddess of dawn and “Boreas” is for Greek name for north wind. Also called the northern polar lights because it is visible in the Northern sky only from the Northern Hemisphere and it most often occurs from September to October and from March to April. The auroral zone is typically 10° to 20° from the magnetic pole defined by the axis of the Earth's magnetic dipole. The northern lights have had a number of names throughout history. The Cree call this phenomenon the "Dance of the Spirits". In Europe, in the Middle Ages, the auroras were commonly believed a sign from God. On August 28, 1859 and September 2, 1859 as a result of the “great geomagnetic storm” are produced the auroras, the most spectacular ever witnessed throughout recent recorded history. Probably the aurora was produced by one of the most intense coronal mass ejections in history, very near to the maximum intensity of the sun. Aurorae occur on other planets. Similar to the Earth's aurora, they are visible close to the planet's magnetic poles. Aurora frequency of occurrence is common in the Poles in temperate latitudes, when a strong magnetic storm temporarily expands the aurora oval. The most common large magnetic storms are during the peak of the eleven year sunspot cycle or during the three years after that peak.
[source]
22:46
Amazing Phenomena, Nature facts