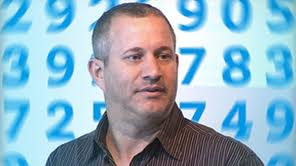 Scott Flansburg is known as the human calculator because he can add, subtract, multiply, divide and even calculate square and cube roots in his head. He does this faster than anyone on earth and with astonishing accuracy.

Using cutting-edge technology, Daniel Browning Smith uncovers the amazing secret behind Flansburg’s superpower.He was entered into the Guinness Book of World Records for speed of mental calculation. He is the annual host and ambassador for World Maths Day, and is a math educator and media personality.

Flansburg currently holds the Guinness World Record for adding the same number to itself more times in 15 seconds than a person can do using a calculator, and he also demonstrated this feat for the students.

"All of you have a calculator sitting right there," Flansburg said, pointing to his forehead, "and you're not using it."

Secret : Flansburg then shared his first secret, which he claims to have discovered while golfing with rock star Alice Cooper on Sept. 9, 1999. He explained that every number higher than nine subtracts down to nine. For example, five plus five equals 10, and 55 minus 10 equals 45. When you add four and five together, you get nine.

Scott Flansburg presents all over the world on ways to think about numbers differently. He examines various techniques of looking at solving computation problems in your head. He explores how to improve speed and accuracy of mental computation while discussing integrating engaging technologies into the classroom to help switch kids on to math.

"I didn't like math," admitted seventh-grader Emily Fiorentino after the assembly, "but I can definitely add better."