How To See Impossible Colors By Human Eyes ?

Is there any possibility to see impossible colors ?

If you are thinking like this , then the answer is yes. 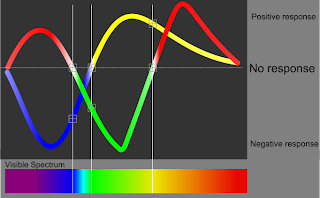 Hiding in the shadows between the colors we see everyday are weird, impossible shades, colors that you shouldn't be able to see and generally don't unless you know how.

Scientific Proof : In 1983, Hewitt D. Crane and Thomas P. Piantanida carried out tests using a device that had a field of a vertical red stripe adjacent to a vertical green stripe (or in some cases, yellow–blue). In contrast to the apparatus used in simpler tests, the device had the ability to track involuntary eye movements and to adjust mirrors so that the image would appear to be completely stable. The boundary of the red–green stripes was stabilised on the retina of one eye while other eye was patched and the field outside the stripes was blanked with occluders. This gives and allow for a mixing of the two colors in the brain, producing neither green for a yellow–blue test, nor brown for a red green test, but new colors entirely.This forms the new color. Some of the volunteers for the experiment even reported that afterwards, they could still imagine the new colors for a period of time. 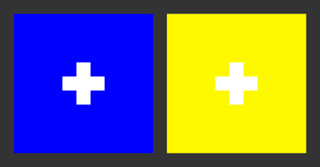 Some people may be able to see the color "yellow–blue" in this image by allowing their eyes to cross so that both + symbols are on top of each other.

Understanding a little about how humans perceive color is crucial to seeing impossible colors. Our eyes used something called opponent process to work more efficiently. This plays upon the fact that the eye's primary light receptors, the cones, have certain overlaps in What Wavelengths that perceive by the eyes. To save energy, our eyes measure the differences between the responses of wavelengths perceive in various cones rather than figuring out each cone's individual response.