1. Borley Rectory - The Most Haunted House in England 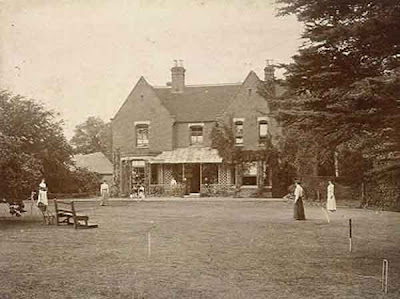 Image Credit
The most famous case in the career of Harry Price was undoubtedly that of Borley Rectory, a deteriorating house in Essex.

Borley Rectory was a Victorian mansion which gained fame as 'The Most Haunted House in England', before it was destroyed by fire in 1939.

It is Located in the village of Borley, Essex, the big Gothic-style rectory had been the scene of occasional alleged hauntings ever since it was built. But these reports increased suddenly in 1929, after the Daily Mirror published the findings of paranormal researcher Harry Price.


Harry Price got involved in the case after a newspaper carried a story about a phantom nun at the house in June 1929. Price was asked by the paper to investigate and he was told about various types of phenomena that had been reported there, like phantom footsteps, strange lights, ghostly whispers, a headless man, a girl in white, the sounds of a phantom coach outside, the apparition of the home’s builder, Henry Bull, and of course, the spirit of the nun. This spectral figure was said to drift through the garden with her head bent in sorrow.

Local legend had it that a monastery had once been located on the site and that a 13th century monk and a beautiful young novice were killed while trying to elope from the place. The monk was hanged and his would-be bride was bricked up alive within the walls of her convent. Price scoffed at the idea of such a romantic tale but was intrigued by the phenomena associated with the house. 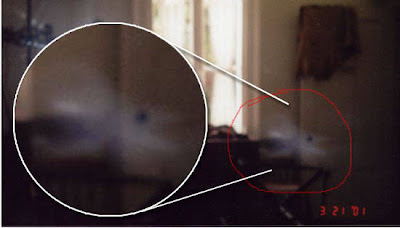 Photo captured by Kristina
She says " I took this photo this past March at The Whaley House in Old Town, San Diego. This was my first time visiting the house. The bright light on the upper left side is from the flash on my camera, but I've circled what I can't explain. I have no idea what this is. I just thought I'd share this pic with you all. Also, this was the only pic that came out blurry! "

Author deTraci Regula relates her experiences with the house: “Over the years, while dining across the street at the Old Town Mexican Cafe, I became accustomed to noticing that the shutters of the second-story windows (of the Whaley House) would sometimes open while we ate dinner, long after the house was closed for the day. On a recent visit, I could feel the energy in several spots in the house, particularly in the courtroom, where I also smelled the faint scent of a cigar, supposedly Whaley’s calling-card. In the hallway, I smelled perfume, initially attributing that to the young woman acting as docent, but some later surreptitious sniffing in her direction as I talked to her about the house revealed her to be scent-free.” 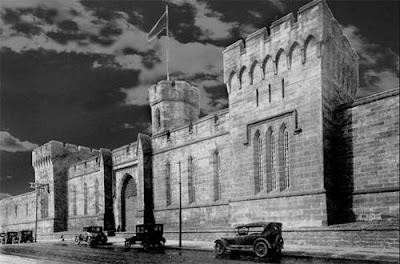 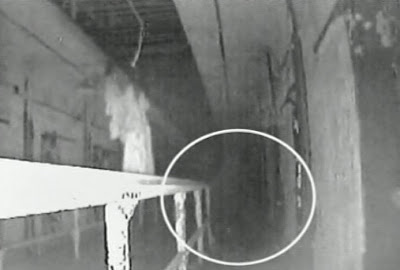 It is Designed by John Haviland and opened in 1829, Eastern State is considered to be the world’s first true penitentiary. Its revolutionary system of incarceration, dubbed the Pennsylvania System, originated and encouraged solitary confinement as a form of rehabilitation. On June 1st, 2007 a television show called “Most Haunted” went live to the penitentiary. Part of the group went to Al Capones cell. Two people passed out while “investigating” the prison. One member of the team, Yvette, stated that “this is the most evil place I have ever been.” They claimed to have had contact with spirits but there was no hard evidence that their claims were legitimate. 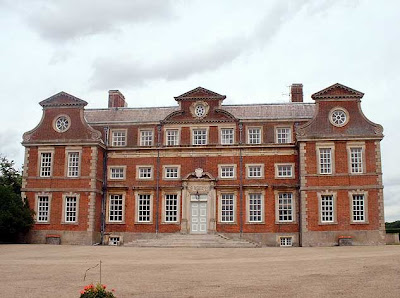 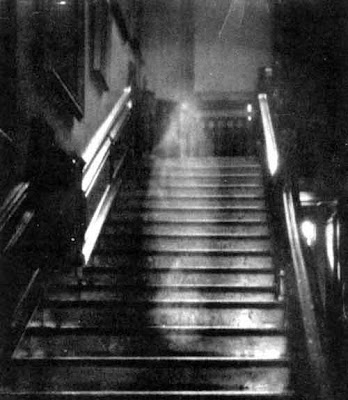 Raynham Hall is a country house in Norfolk, England. For nearly 400 years it has been the seat of the Townshend family. The hall gave its name to the area, known as The Raynhams and is reported to be haunted, providing the scene for possibly the most famous ghost photo of all time, the famous Brown Lady descending the staircase. However, the ghost has been seen infrequently since the photo was taken. Its most famous resident was Charles Townshend, 2nd Viscount Townshend (1674–1738), leader in the House of Lords. 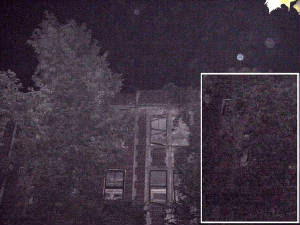 Waverly Hills Sanatorium, located in Louisville, Kentucky, opened in 1910 as a two-story hospital to accommodate 40 to 50 tuberculosis patients. It has been popularized on television as being one of the “most haunted” hospitals in the eastern United States and was seen on ABC/FOX Family Channel’s Scariest Places On Earth as well as VH1's Celebrity Paranormal Project. It was also seen on the Sci Fi Channel’s Ghost Hunters. Ghost investigators who have ventured into Waverly have reported a host of strange paranormal phenomena, including voices of unknown origin, isolated cold spots and unexplained shadows. Screams have been heard echoing in its now abandoned hallways, and fleeting apparitions have been encountered. 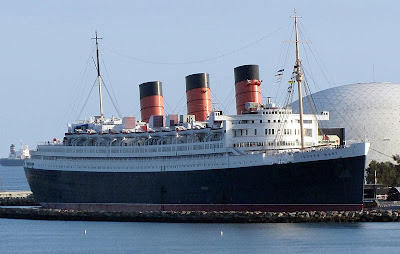 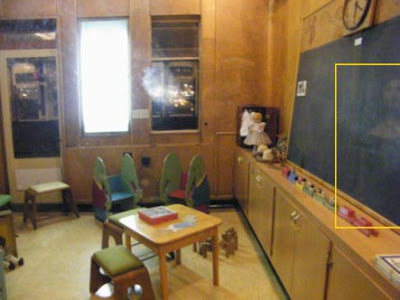 This grand old ship is quite haunted, according to the many people who have worked on and visited the craft. Once a celebrated luxury ocean liner, when it ended its sailing days the Queen Mary was purchased by the city of Long Beach, California in 1967 and transformed into a hotel.

The most haunted area of the ship is the engine room where a 17-year-old sailor was crushed to death trying to escape a fire. Knocking and banging on the pipes around the door has been heard and recorded by numerous people. In what is now the front desk area of the hotel, visitors have seen the ghost of a "lady in white."

Ghosts of children are said to haunt the ship's pool. The spirit of a young girl, who allegedly broke her neck in an accident at the pool, has been heard asking for her mother or her doll. In the hallway of the pool's changing rooms is an area of unexplained activity. Furniture moves about by itself, people feel the touch of unseen hands and unknown spirits appear. In the front hull of the ship, a specter can sometimes be heard screaming - the pained voice, some believe, of a sailor who was killed when the Queen Mary collided with a smaller ship. 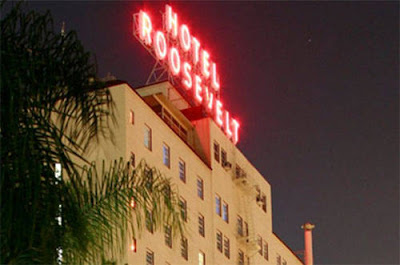 The Hollywood Roosevelt Hotel is a historic Spanish-style hotel located at 7000 Hollywood Boulevard in Hollywood, Los Angeles, California. Named after Theodore Roosevelt and financed by a group including Douglas Fairbanks, Mary Pickford and Louis B. Mayer, it first opened its doors on May 15, 1927.

Marilyn Monroe stayed in Cabana Suite 229, which overlooked the pool. A mirror which once hung in her room, now in storage following hotel renovations, is said to be haunted by her spirit, though this is just urban myth.

In December 1985 a maid named Suzanne Leonard was dusting the mirror when she saw a blonde woman standing directly behind her reflected in the glass. She turned to speak to the woman, but no one was there. When she turned back, the reflection was again behind her. Two psychics “read” the mirror, and found much sadness in it, but it was inconclusive whether or not the apparition was the famed actress's. 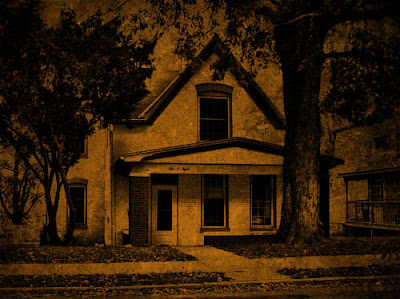 The Sallie House in Atchison, Kansas quickly earned a national reputation as one of the most haunted places in the U.S. -- almost certainly the most haunted in the state of Kansas. The rather simple-looking painted brick house at 508 N. Second Street, built between 1867 and 1871, gives no indication from the street of its spooky reputation, but the many experiences of those who lived there are have subsequently investigated the place testify as to its ghostly vibes -- mostly of the negative kind.

The house was brought to national attention when Debra and Tony Pickman lived there from 1992 to 1994 and had many distrubing encounters, including physical attacks on Tony, which were documented by the Sightings television show. It's called the Sallie house because the daughter of some previous tenents had an imaginary friend named Sallie, and she is beleived to be one of the spirits haunting the house. When Tony Pickman drew a picture of the ghost Sallie he had seen, the daughter identified it as her friend, Sallie. (Coincidentally  or not people who owned the house in the 1940s had a daughter named Sallie, although she did not die in the house or at a young age.) 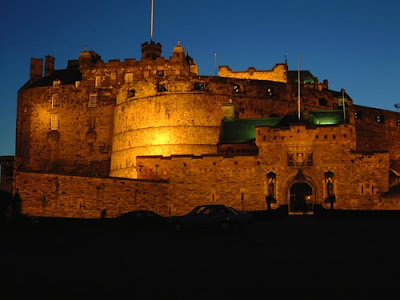 Edinburgh Castle is reputed to be one of the most haunted spots in Scotland. And Edinburgh itself has been called the most haunted city in all of Europe. On various occasions, visitors to the castle have reported a phantom piper, a headless drummer, the spirits of French prisoners from the Seven Years War and colonial prisoners from the American Revolutionary War - even the ghost of a dog wandering in the grounds' dog cemetery. 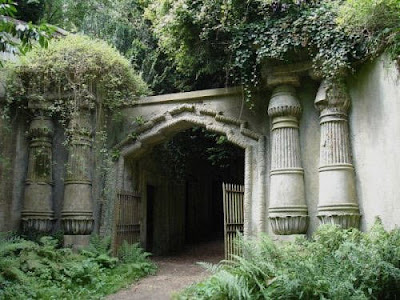 Besides having such famous people buried there as Karl Marx, Douglas Adams, and the parents of Charles Dickens, Highgate Cemetery has long been known for its ghosts, sinister activities, and other strangeness, including:

The most famous spook in this cemetery is The Highgate Vampire, who is not really a vampire in the classic sense, but a phantom that is described as a 7-foot-tall, dark male figure with piercing, hypnotic eyes and wearing a long black coat and high top hat; he seems to vanish into thin air. There have been several dozen sightings and encounters since the late 1960s.
Source ~ [1] [2] [3]
23:50
Haunted, Horrible, Mysterious Facts, Top 10, Unbelievable Places, Unusual Places, World Facts, World's Most Haunted Places