Girl, 13, tries to commit suicide so her dying father can have her liver.


In a desperate act of love to try to save her dying father, a 13-year-old girl has attempted suicide so he could receive her liver.

A person named Chen Jin took more than 200 sleeping pills and was also severely burned by an electric blanket after leaving a note imploring her mother to give her liver to her cancer-stricken father.

The family have been struggling to pay the father's hospital bills and a public website has been set up in the hope that donations will come in to help them.

Hospital officials in Shanghai said she was passing in and out of consciousness after her suicide attempt and it was touch and go whether she would survive.

This story didn't come on the news until her story appeared in several Chinese newspapers that her father found out about Chen's attempt to help him.

The Shanghai Daily newspaper reported that Chen had found a medical report in her mother's purse last month stating that her father was dying of liver cancer and had only three months to live. 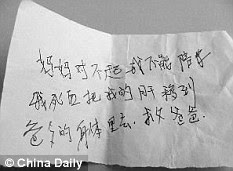 'Mum, I'm sorry I couldn't stay with you any longer,' she wrote in her goodbye note.

'Please give my liver to dad and save him after my death.'

After swallowing handfuls of sleeping pills she was burned by the electric blanket she was lying on and even if she survives doctors said she would need extensive surgery for the burns.

She was discovered by Chen's 43-year-old mother, Cui Lan, who has recently been laid-off from a factory, who at first found the doors of the house jammed from the inside.

When she eventually broke in, Cui found her unconscious daughter, the suicide note and two empty pill bottles.

'She loves her dad more than herself,' Chen's tearful mother said.

The girl was rushed to the same hospital where her father is being treated. 1.5 million people in China need organ transplants each year - but only 10,000 can find donors.