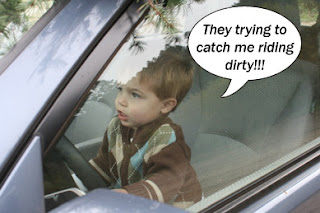 Law enforcement in Lapeer, Michigan, had an unusual run-in on Saturday morning. A 6 year old boy took his dad's car to pick up some Chinese Food.

The Detroit News reports that concerned witnesses called the cops to report a car that was driving erratically. The paper reported,"They told police when they called that it looked like a 6 year old boy was driving the car," said Sgt. Andy Engster of the Lapeer County Sheriff's Department. "And they were exactly right."

When the concerned persons looked the boy driving the car, they called the Police and then the Police responded but not before other drivers boxed in the young Chinese food enthusiast with their own cars. One of the civilians then reached into the 6 year old's car, turned off the ignition and (Wisely) removed the keys.

The boy told that he had taken the keys from the counter and that his previous experience behind the wheel was nonexistent."He said he never even sat on his dad's lap to steer the car or anything,"Engster said.

The boy also told that he had hit a street sign near his home. After seeing the damage, he figured he needed to drive to the car dealer for repairs. It was not clear that the boy was planning to eat first. Also not clear "How the boy planned for the food,much less the car repairs."


When the police spoke to the boy's father, he said he was asleep at that time. "He didn't even know (his son) was gone,"Engster said. An investigation is ongoing, according to the Detroit News.


Check the Video Below -: