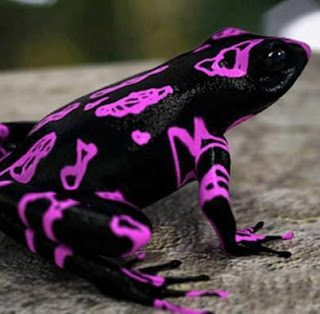 The Costa Rican Variable Harlequin Toad (Atelopus varius), also known as the clown frog, is a neo-tropical true toad from the family Bufonidae (Crump 1986). Once ranging from Costa Rica to Panama, A.The historic range of A. varius stretched from the Pacific and Atlantic slopes of the Cordilleras de Tilaran mountain range in Costa Rica into western Panama. Suitable habitat includes both pre-montane and lower-montane zones as well as some lowland sites along rocky streams in hilly areas (ranging from 6 to 2000m in elevation) (Savage 1972). varius is now listed as critically endangered and has been reduced to a single remnant population near Quepos, Costa Rica (rediscovered in 2003) and is presumed to be extinct in Panama (IUCN, personal correspondence 2007). Recent variation in air temperature, precipitation, stream flow patterns, and the subsequent spread of a pathogenic chytrid fungus (Batrachochytrium dendrobatidis) linked to global climate change have been the leading cause of decline for A. varius
[source]
22:08
Amazing Frog, Animal Facts