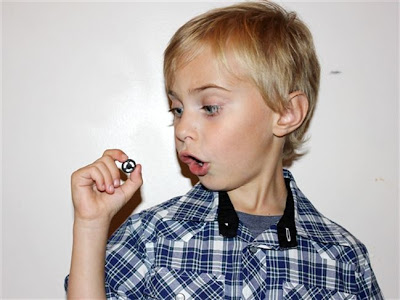 photo credit
SALT LAKE CITY, UTAH Doctor's treating a boy with severe sinus problems made a bizarre discovery. After years of suffering from a variety of sinus issues, an observant doctor noticed something strange and unusual in the nose of 6-year old Isaak Lasson.

KSL reported that the boy has seen multiple doctors and had been given round after round of antibiotics to deal with his problems but to no avail.

For three years this continued. Then one day in July last, an observant doctor sent Isaak to a specialist after noticing something unusual in the boy's nose.

Within the fungus was encased a flexible lego tire that the boy must have jammed up there years before. Apparently Isaak's appetite has now improved along with his breathing, said KSL.

“You ask yourself, ‘Am I a bad parent because I didn’t catch it sooner?’ But the doctors just kept prescribing antibiotics,” said Isaak's father Craig.
Craig Lasson said since the LOGO was removed, Isaak's appetite is better, he has more energy and is sleeping soundly.