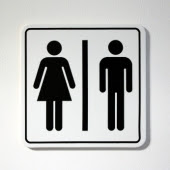 Researchers discovered the brain’s self-control mechanism provides restraint in all areas at once.They found people with a full bladder were able to better control and “hold off” making important, or expensive, decisions, leading to better judgement.

In one experiment, the researchers from the Netherlands took participants either drink five cups of water or take small sips of water from five separate cups. After about 40 minutes, the time it takes for water to reach the bladder, researchers tested the subject’s self control. Participants were asked to make eight choices: each was between receiving instant gratification versus a larger but deferred, reward. For example, in one scenario they could opt for picking up $16 the next day or $30 in 35 days. The people with full bladders were more likely to opt for the larger rewards later. Other experiments backed up the link. "You seem to make better decisions when you have a full bladder," said lead researcher Mirjam Tuk, of the University of Twente in the Netherlands

Tuk's hypothesis about full bladder prompting better decisions is that, because feelings of inhibition all originate from the same area of the brain—self-control in one area can affect self-control in others. "People who are experiencing higher levels of bladder control should be better able to control unrelated impulses," she wrote in an email to CNN.