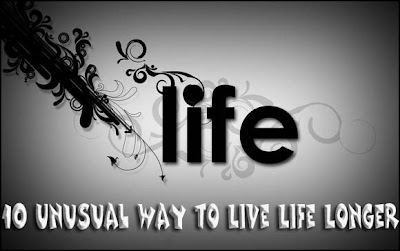 Science proves that living a long, healthy life is easier than you think

1. Drink red wine
At first glance, drinking booze doesn’t seem to be the best advice to those who aim to lead a long and healthy life. As we know that , the consumption of alcohol increases our risk of cancer, dementia and liver disease, to name a few. The less you drink, the longer you live, right? No. Several longitudinal studies have shown that people who don’t drink alcohol tend to die before the ones who do. Recent studies show that drinking around one glass of red wine in a day may have certain health benefits by protecting against certain cancers and heart disease, and can have a positive effect on cholesterol levels and blood pressure. Excessive drinking, however, unfortunately doesn’t produce the same benefits.

2. Live on a Mountain
People living on the mountains live longer. It’s as simple as that. Whether you’re talking about long-lived communities in the US, seven out of ten of which are in high-country Colorado counties, or the tiny Sardinian mountain town of Ovodda, where as many men as women live to be 100, there can be little question that that fresh mountain air does you good Or maybe it’s because if you live on a mountainside at least half of your walking is uphill. That would be giving your heart a good workout whenever you set foot outside your front door. Whatever it is, just moving to the mountains could give you extra years of life.

3. Get Rich
If you want to live a long time, think again. Wealth and long, healthy living is positively correlated all around the world. Poorer countries have predictably lower life expectancies because their governments have less money to spend on health care, but even within rich countries the rich live longer than the poor.

So you may want to reconsider getting out of the rat race. The ‘haves’ really do have it better than the ‘have nots’.

4. Get Religion
Only the good die young? Well, it’s a sad fact that whatever god(s) you believe in want to keep you on this Earth a few years longer than our atheist friends.Many studies have shown a positive correlation between religious belief and good health. In a meta-analysis of 42 independent studies Michael E. McCullough of the National Institute for Healthcare Research found that the likelihood of mortality when participants were followed up was higher among the non-religious group.

The Seventh Day Adventists living in Loma Linda, California are a case in point. They are the long-lived community in the US, even the ones who don’t follow the vegetarian diet mandated by the church.

Whether this is due to the better levels of social support provided within religious communities or divine intervention is still not known. A 2006 study revealed that people who frequent church on a weekly basis could live up to three years longer than those who don't.
5. Work Hard and Be Stressed
May be you are wondering that how I am talking to be stressed. The Longevity Project, a study that analyzed eighty years’ worth of information, beginning in 1921, on group of 1,500 children, found some surprising information. Those children who were happy-go-lucky, carefree, and had a good sense of humor lived shorter lives than those who more serious, persistent and prudent. As adults, these people were the most involved with and committed to their jobs. So you might want to stop all that kidding around.

This confounds earlier findings that happiness and health go hand in hand. Yes, they do, but probably people are happy because they’re healthy, not the other way round.

6. Get laughing
A good laugh is like a mini-workout - 100 to 200 laughs are equivalent to ten minutes of jogging or rowing, says US cardiologist, Dr William Fry. Research also shows that it lowers levels of the stress hormones, and heightens the activity of the body's natural defensive killer cells and antibodies.

7. Join a bridge club or do Shopping
As you get older, playing games or going shopping could be just as good for your health as physical exercise, according to a Harvard University study. The key to good health, conclude the researchers, is doing what you enjoy and feeling good about yourself.
8. Get a pet
Families who own a dog or cat are less stressed and visit their doctors less often than those who don't, say scientists from Cambridge University. Pets make you feel optimistic and relaxed, which lowers your blood pressure. Dogs give best results, but even a goldfish in a bowl works.

9. Refuse Mediocrity
10. Boost your love life
Having love between three to four times a week is thought to reduce the risk of having a heart attack or stroke in half. During love, the average person maintains their heart rate above 70 per cent of the maximum, making love a wonderful workout. Love reduces stress, leads to greater contentment and better sleep.