1. Married with a dead girlfriend 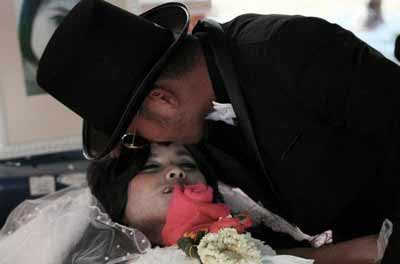 Even when the feelings involved are genuine, the case of Chadil Deffy is in many ways tragic. Deffy, from Thailand, had been dating Sarinya Kamsook for ten years after meeting her at university. However, when one day she asked him for his hand in marriage, he rebuffed her – citing a heavy work load.

In January 2012, Sarinya was killed in a car accident. According to Deffy’s friends, he decided to marry Sarinya after her death, in order to right the wrong of denying her while she was alive. The ceremony took place at the same time as Sarinya’s funeral. Deffy placed a ring on her finger and kissed the bride. His decision to post photos of the wedding on Facebook, along with a video of the ceremony on Youtube, led to accusations that the wedding was a publicity stunt – but his decision does, in fact, seem to have been an honest display of emotion. 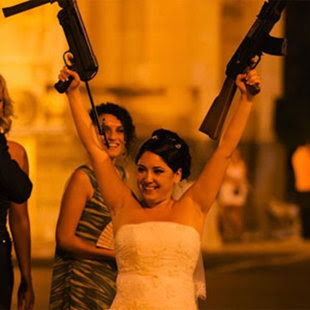 During the wedding reception, the bride is (willingly) "kidnapped" and held hostage by her friends. The bride plays along, posing for photos while pouting or dancing to send to the groom. The kidnappers don costumes and guard the bride with toy guns, then negotiate a ransom price with the groom to return his bride.

The price? A few bottles of whiskey, or maybe a public declaration of love from the groom.

We collected an experienmce of One bride who explains : "Everything was staged and ready in my case. The limousine was waiting for me in front of the restaurant, I was given the 'leave' signal by my friends and together we came here to have some fun.. Now everyone's thinking what ransom to ask the groom."

3. The woman who married the Eiffel Tower 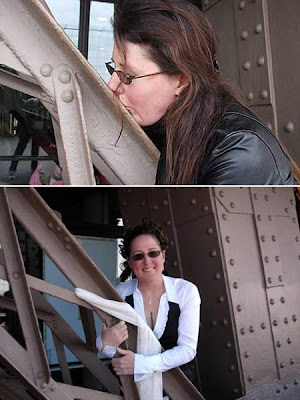 Erika La Tour Eiffel, 37, a former soldier who lives in San Francisco, has been in love with objects before. Her first infatuation was with Lance, a bow that helped her to become a world-class archer, she is fond of the Berlin Wall and she claims to have a physical relationship with a piece of fence she keeps in her bedroom. But it is the Eiffel Tower she has pledged to love, honour and obey in an intimate ceremony attended by a handful of friends. She has changed her name legally to reflect the bond.

4. The man who married himself 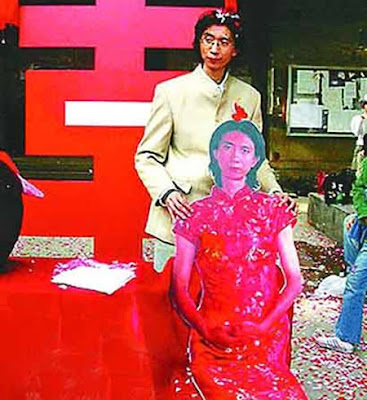 Liu Ye ,39 years old, from Zhuhai city, China, has married himself in front of more than 100 guests at a traditional courtyard. He, and the foam cut-out of himself in a red bridal dress, were attended by one bridesmaid and one groomsman. On the way out he bowed to the ancestors and to senior guests in return for blessings. Lui denies being gay but says he could be "a bit narcissistic" according to local media reports. "There are many reasons for marrying myself, but mainly to express my dissatisfaction with reality," Lui said. "This marriage makes me whole again. My definition of marriage is different from others."

5. Marry with a truck 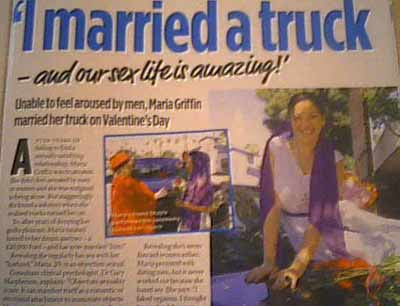 Maria Griffin of San Bernadino, California, feared she was asexual for years when she was unable to feel aroused by other people. She claims to have had her first orgasm while thinking about the Chrysler Building.

Over time she developed feelings towards vehicles, Ford Trucks in particular. No longer willing to fake affection for men, she purchased a Ford and married him in a wedding ceremony conducted by a friend. After the wedding, the married couple went on a honeymoon to a campsite. According to Maria, their s*x life is healthy and active.

6. The Japanese man who married a character from Nintendo DS video game 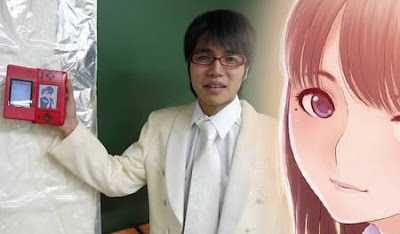 In November, a Japanese man known as Sal9000 married Nene Anegasaki from the Nintendo DS video game “Love Plus,” a virtual dating game. He actually had a real ceremony in Guam, where apparently it's legal to marry not only inanimate but imaginary objects. His wife currently lives in the Nintendo DSi LL/XL, which is a giant version of the DS and visitors at the wedding watched a slide show and saw that the happy groom kiss his wife. Eek, his poor wife is trapped in a video game and in a marriage she couldn't possibly be aware of.

7. The Russian couple who decided to get married while bicycling 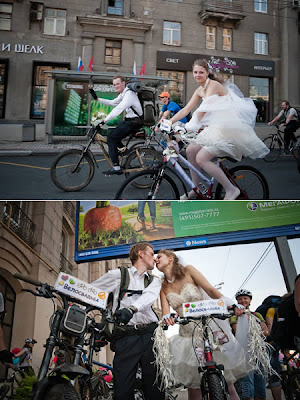 A couple of bicycle lovers decided to tie the knot in a very unusual but healthy way - by riding bicycles all over the city, accompanied of course by their cyclist guests.

8. The woman who is about to get married to a fairground ride 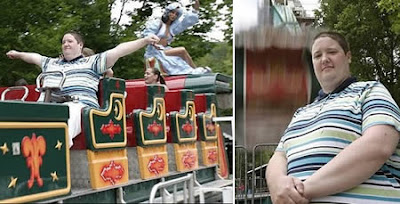 Amy Wolfe is a confident 32 year old American who lives in New York State. She has been diagnosed with Asperger syndrome and has been in relationships with models of spaceships, the Twin Towers, a church organ and a banister, though her main lover – since OS people believe in polygamy – is a fairground ride called 1001 Nacht, located at Knoebels, an amusement park in Pennsylvania . She now plans to marry the magic carpet. This follows a "courtship" of 3,000 rides over ten years. She will change her surname to Weber after the manufacturer of the ride she travels 160 miles to visit 10 times per year. Wolfe even sleeps with a picture of the ride on her ceiling and carries its spare nuts and bolts around to feel closer to it. She claims to believe that they share a fulfilling physical and spiritual relationship and does not get jealous when other people ride it.

9. The man who married a pillow 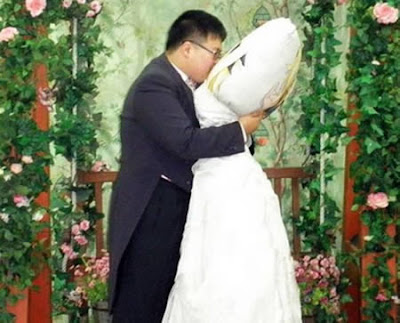 True love can take many forms. In this case, it has taken the form of a Korean man falling in love with, and eventually marrying, a large pillow with a picture of a woman on it. Lee Jin-gyu fell for his ‘dakimakura' – a kind of large, huggable pillow from Japan, often with a picture of a popular anime character printed on the side. In Lee's case, his beloved pillow has an image of Fate Testarossa, from the ‘magical girl' anime series Mahou Shoujo Lyrical Nanoha. Now the 28-year-old otaku (a Japanese term that roughly translates to somewhere between ‘obsessive' and ‘nerd') has wed the pillow in a special ceremony, after fitting it out with a wedding dress for the service in front of a local priest. Their nuptials were eagerly chronicled by the local media.”

10. The woman who married a snake 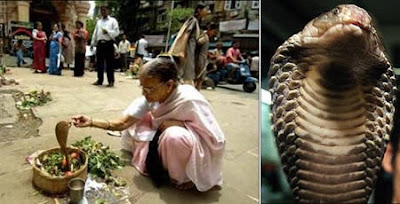 A woman, who claimed to have fallen in love with a snake got married to the reptile as per Hindu rituals at Atala village of Orissa's Khurda district. This unusual marriage took place in 2006 with over 2,000 people taking out a procession to celebrate the event. Attired in a silk saree, 30 year-old Bimbala Das was seen sitting for around one hour as priests chanted mantras to complete the ritual. The snake which lived in an ant hill near her home, however, was not around and a brass replica of a serpent was kept by the side of the woman instead. Bimbala said: "Though snakes cannot speak nor understand, we communicate in a peculiar way. Whenever I put milk near the ant hill where the Cobra lives, it (the snake) always comes out to drink." When Bimbala disclosed her idea of marrying a snake, villagers reportedly appreciated it saying the marriage will bring good fortune to the area. They also came forward to offer a grand feast for those who came to attend the marriage.