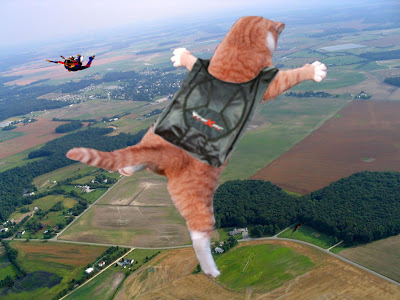 This can seem shocking and counter-intuitive, but the laws is not violating , cats aren't violating the laws of physics. They're actually taking advantage of them.

New York veterinarians gathered up data that showed that the death rate for cats falling from 2 - 6 stories was much higher than from 7 - 32 stories.

Cats have a really keen sense of direction. When they're falling, they are able to tell which side is up really easily and position their body upright.

This positioning helps them and allows them to land on all four legs. Not only just that, they also flex them on impact. This allows them to face the shock from the fall and prevent their legs from breaking.

Scientific Reason : A cat when falling from a higher floor, after it stops accelerating, spreads its legs like an umbrella shape, which increases the area against which the air must push and increases the friction, thus slowing the cat’s fall. Through the cats has highly developed sense of balance, she buys more time to maneuver his body in preparation for landing on all fours. A cat falling from a lower height does not have the time to increase its body’s area, slow its fall, or position his body to land on all four feet.