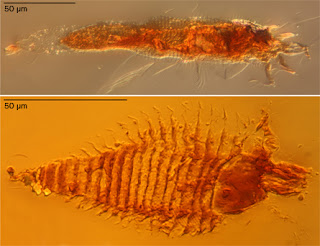 
The new mite species Triasacarus fedelei (top) and Ampezzoa triassica (bottom) were found in 230-million-year-old amber. This finding pushes back the record of oldest arthropods preserved in amber by about 100 million years.
Mites could give the competitors on Survivor a run for their game-show money.

Two of the tiny creatures, trapped in fossilized tree resin, break the record for ancient amber-preserved arthropods, a group of critters that includes beetles, butterflies, spiders and shrimp. At 230 million years old, the mite fossils are about 100 million years older than previous findings and suggest that mites basic body blueprint may be built to outwit, outplay and outlast.

David Grimaldi of the American Museum of Natural History in New York City says “Dinosaurs have come and gone, but mites have hardly changed,” says. “Their body form is quite similar to what we see in gall mites today.”

That similarity is somewhat surprising considering that the Earth was profoundly different 230 million years ago, when most plants were ferns, the Atlantic Ocean didn’t exist and pterosaurs cruised the skies. The Triassic-period mites, however, look just like their present-day relatives : They have segmented bodies, piercing mouthparts and legs bristling with “featherclaws,” Grimaldi and his colleagues report online August 27 in the Proceedings of the National Academy of Sciences.

Arthropods are the most diverse group of creatures on Earth, making up more than 50 percent of all known species. They’re one of the key lineages of life, says Engel. “Anything we can do to better understand what led to their successes and failures can tell us how they shaped the planet in the past and how they’re shaping the planet today,” he says.