Area 51 is a military base and a remote detachment of Edwards Air Force Base. It has a location in the southern portion of Nevada in the western United States, 83 miles (133 km) north-northwest of Las Vegas. The base's primary purpose is undetermined, however, based on historical evidence, it appears to support development and testing of experimental aircraft and weapons systems.

At Area 51 the U.S. government has been test-flying highly secret BLACK PROJECT aircraft for many years, several people think this includes UFOs. They call one part of this military site Groom Dry Lake area. It has been proven the Stealth and SR 71 projects were built and tested at this famous Area 51. People who work in and around this military installation refer to this highly secret area as "Dreamland" or "Skunkworks" or sometimes just "Groom Lake." sometimes just "Groom Lake."

For decades, the base remained hidden from almost everyone, but in 1988 a Soviet satellite photographed the base. Several publications acquired the photos and published them. The secrecy of the base is still of paramount importance, but as far as satellite coverage is concerned, the cat is out of the bag. 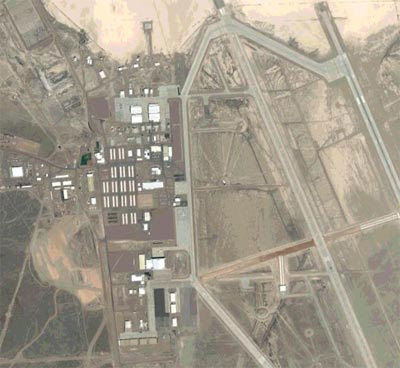 It seems somewhat strange that such a large expanse of land can be used to hide anything at all from public view, but it seems almost certain that something is taking place there that the public is not meant to know about.

The area is fenced off, the fence being guarded by hundreds of closed circuit security cameras worthy of a modern-day Berlin Wall. Signs in the proximity warn that deadly force and violence is quite permissible to prevent intruders. Someone seems very keen to keep other people out. The roads surrounding the area are guarded by white vehicles bearing government plates. They are manned by men wearing black uniforms who appear to be heavily armed. Moreover, the roads are full of movement sensors which transmit any movement on the roads. All this does not seem to point to a conventional firing range.

One theory would have it that the area is a research center for investigating UFOs and for manufacturing the infamous black helicopters. Certainly, UFOs would need to be taken somewhere for investigation, such as in the aftermath of the Roswell incident. Of course, the American government could also be trying to reproduce the technology gleaned from the alien spacecraft here.

An even more disturbing possibility is that some form of alien life is being kept alive in the area, retrieved from their spacecraft. Who knows what happened to the alien bodies after Roswell? If this is the case, it would seem that the authorities are sitting on a time bomb.

There is some danger in this, because if you wander across the unfenced military border, you could be arrested and fined $600. 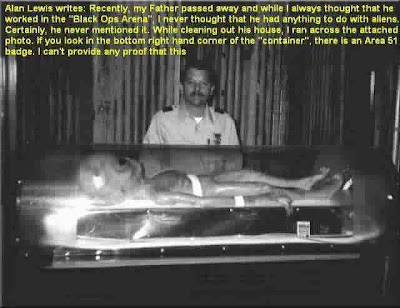 Evidence : A gentleman by the name of Bob Lazar claims he worked with extraterrestrial flying saucers at an installation at Papoose Lake, south of Groom Lake in an area he calls S-4. Although he gained a great deal of attention, there's no way to confirm or refute his assertions.

Other true believers say an alien craft crash- landed near Roswell, New Mexico in 1947. Furthermore, they say the saucer bits and bodies were taken to Area 51 for study and are still there today. A film of an alien autopsy, supposedly from the Roswell alien crash, added to the controversy.


Till Now This is the big Question that Is there any Alien Or not ?
[source]