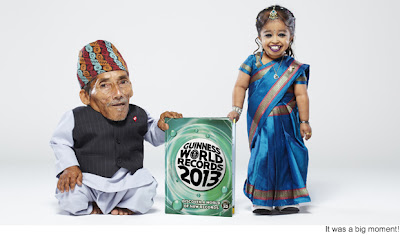 The historic moment is first time in history that the shortest male and female in the world have met. Each wore traditional outfits from their native countries and smiled and laughed throughout.

Marco Frigatti, Official Guinness World Records Adjudicator, who also took part in the shoot, said: "It was an extraordinary moment , they are both such incredible individuals. Everyone knew this was a very special moment, the atmosphere was magical." 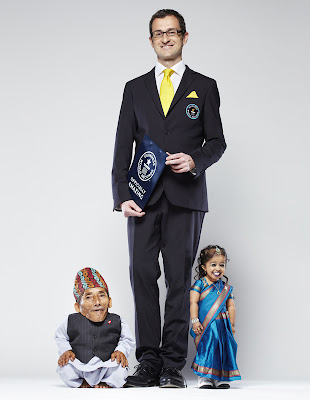 On 16 December 2011, Jyoti Amge from Nagpur, India, reached the age of 18 and took the title of Shortest Living Woman.

Jyoti, who has a form of dwarfism called Achondroplasia, won't grow any taller than her current height. Due to her size, she has to have clothes and jewellery which is made specially. This is very starange that She sleeps in a tiny bed and uses special plates and cutlery to eat.  She loves fashion and make-up and is currently pursuing her dream of becoming successful actress in the movie business.  She has already starred in a number of Indian films.

The Words by Jyoti  itself - Jyoti said: “Since being recognised by Guinness World Records I have been able to visit lots of different countries. I love travelling. I have visited Japan and parts of Europe and now I can’t wait to visit the UK.”

In February 2012, Chandra Bahadur Dangi who is from Nepal made headlines across the globe when he was crowned the world’s Shortest Man, standing at 54.6 cm (21.5 in).  His size also meant that he inherited the title of Shortest Man in history, breaking the previous record of India’s Gul Mohammed (1957–97) who was 57 cm (22.5 in) tall. Now He is the new Guiness Wold Recorder.

Chandra is 72 years old and weighs 14.5 kg (31 lb 15 oz). Until the recent record announcement, he had spent his entire life in the remote area in Nepalese mountain village of Rhimkholi which is about 250 miles west of Kathmandu.

He said: “I’m very happy that I’m being recognized by Guinness World Records and that my name will be written in a book.  It’s a big thing for my family, my village and my country.  I am very happy.”
[source]