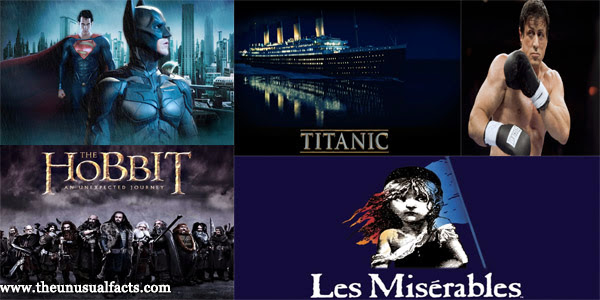 
1. Michael Keaton didn’t want Michelle Pfeiffer in the first Batman because it’d be too awkward. She played Catwoman in the sequel.

2. Christopher Mintz-Plasse (McLovin) was only 17 while filming Superbad. Therefore his mother was required to be on the set during the filming of his sex scene.

3. While filming “The Machinist,” Christian Bale only ate an apple and a can of tuna a day. His goal was to weigh 100 pounds before producers stopped him.

4. Because of the way the movie SIN CITY was shot, Mickey Rourke (Marv) and Elijah Wood (Kevin) never met until after the film was released.

5. While filming a scene for Chinatown (1974), Roman Polanski wouldn’t allow a bathroom break for Faye Dunaway. In protest, she pissed in a coffee cup and threw the urine in his face.

7. Richard Dreyfuss’ drug problem was so bad, he doesn’t even remember shooting one of his movies.

8. The Executive Producer of Back To The Future wanted to change the name to ‘Spaceman from Pluto!’

9. During the filming of the movie Titanic, an angry crew member put PCP in James Cameron’s soup, sending him and 50 others to the hospital.

10. The parents in Ferris Buellers Day Off met onset and actually got married after filming.

11. When Joel Coen and Ethan Coen approached Javier Bardem about playing Chigurh, he said “I don’t drive, I speak bad English, and I hate violence.” The Coens responded, “That’s why we called you.”

12. The filming of The Godfather was disrupted by actual Mafia member, Joe Colombo. Producer Al Ruddy met with him and reviewed the script, striking the word “Mafia” completely from the movie. Colombo and his pals also managed to elbow their way into casting and ended up as extras in the film.

13. Bill Murray hired an assistant who “was profoundly deaf and spoke only in sign language” to make communication as difficult as possible between him, the director and the studio during the filming of ‘Groundhog Day’

14. ABBA, not Elton John, was Disney’s first choice to do the music for The Lion King.

15. Pulp Fiction - Uma Thurman originally turned down the role of Mia Wallace. Quentin Tarantino was so desperate to have her as Mia, he ended up reading her the script over the phone, finally convincing her to take on the role.

16. In the movie Les Misérables, Every song was sung live on set. The actors wore ear pieces which fed the sound of a live piano being played off-stage to keep their singing in key.

17. The RoboCop suit was so hot and heavy that Peter Weller was losing 3 lbs a day from water loss. Eventually, an air conditioner was installed in the suit.

18. Sir Ian McKellen became so frustrated filming in front of green screen scenes for The Hobbit that he burst into tears on set.

19. While filming “Schindler’s List,” Steven Spielberg used to put Robin Williams on speaker phone to cheer up the cast and crew.

21. The Dark Knight - While filming both the bank and police department scenes at the post office, an unrelated fire broke out in a top floor mechanical room and many onlookers believed that the smoke and fire was related to the filming.

22. Bolaji Badejo, the 7’2″ Nigerian design student cast as the titular creature in Ridley Scott’s ‘Alien’ disappeared shortly after filming and fans have not since been able to confirm if he is living or dead.

23. While filming “The Passion of the Christ” Jim Caviezel, the actor who played Jesus, was struck by lightning along with the assistant director, who was struck twice

24. Daniel Radcliffe’s stunt double for the first six Harry Potter movies is now paralyzed (quadriplegic) from an accident on set during the filming of Harry Potter and the Deathly Hallows.

25. During filming of Batman Begins, someone crashed into the Batmobile in a state of panic thinking it was an invading alien spacecraft.

26. Charles Bronson, Britain’s most violent prisoner actually shaved his trademark mustache off so Tom Hardy could wear it during the filming of “Bronson”, which was based on his life in prison

27. After filming the freeway scenes for The Matrix: Reloaded, the film makers, instead of disposing of the set, chose to donate it, in pieces, to charity in Mexico to be turned into low-cost housing.

28. The beer used while filming of the Hobbit was custom made by New Zealand brewers. It was a 1% dark stout called “Sobering Thought”.

29. Actress Tallulah Bankhead was infamous for not wearing underwear. During the filming of Lifeboat (1944), the crew complained about her flashing them when she had to climb a ladder. Director Alfred Hitchcock reportedly quipped that he didn’t know if it was a matter for wardrobe or hairdressing.

30. While filming Zodiac, Robert Downey Jr. used to discreetly pee into jars and leave them in corners of the set as protest for not getting enough break time.

31.  The scar over Sean Bean’s left eye was given to him by Harrison Ford, who accidentally struck him with a meat hook whilst filming a scene in ‘Patriot Games’

32. Hugh Jackman went without water for 36 hours before filming the opening scene of “Les Miserables”.

33. Sylvester Stallone broke his neck while filming a fight scene for The Expendables, which required the insertion of a metal plate

34. The working title for “Snakes on a Plane” was changed to “Pacific Air Flight 121″ during filming, but Samuel L. Jackson insisted that they change it back. He later said, “That’s the only reason I took the job: I read the title.”

37. Jackie Brown -  In the novel, Jackie Brown (originally Jackie Burke) is white. Quentin Tarantino changed her race solely for the purpose of getting to work with Pam Grier.

39. Titanic - After filming, the remains of the full-size set were sold as scrap metal.

40. While filming Rocky IV, Dolph Lundgren punched Stallone’s chest so hard, his heart slammed against his breastbone, causing it to swell and his blood pressure shot to over 200. Filming was halted as Stallone was flown into intensive care for eight days.